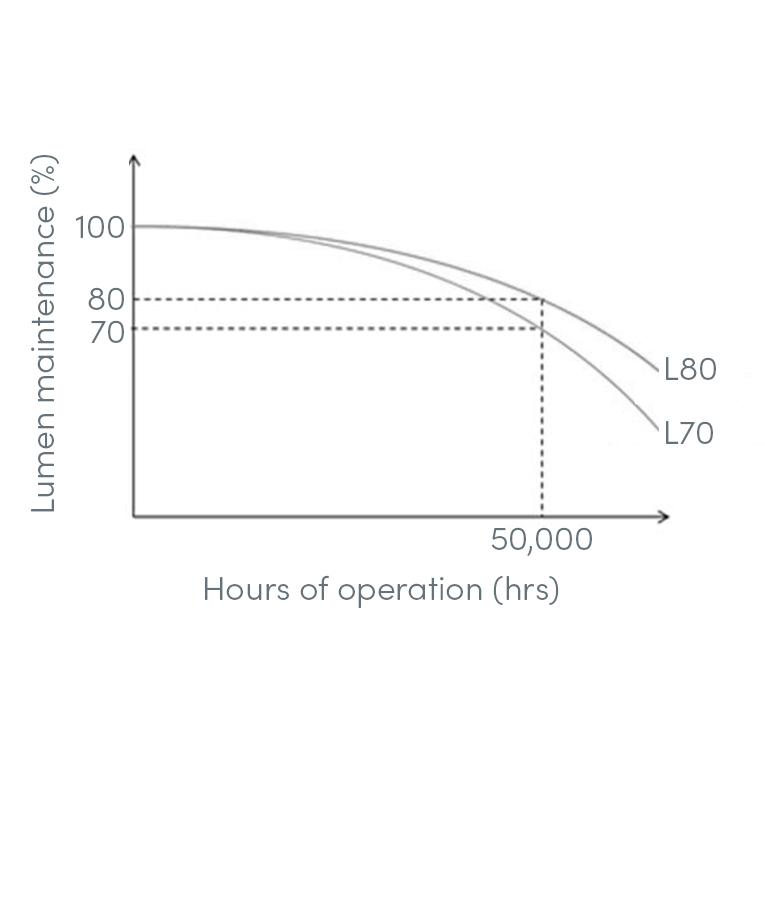 One of the greatest benefits of LED technology is its lifespan.

It is widely understood that LED light sources outlast previous light sources, typically by many years of use. However, the 'lifespan' of an LED is commonly misunderstood.

When a traditional light source, e.g. a halogen bulb, reaches the end of its lifespan it will fail abruptly and stop working entirely. By comparison, LED light sources gradually fade over time until they become too dim to produce usable light.

So, if LED's do not reach a clear or abrupt end to their life, how do we assess how long an LED will 'last'?

LED lifespans are defined using L and B ratings, in combination with hours of operation.

These ratings are determined through LM-80 testing.

What do L and B numbers mean?

L defines the remaining amount of light produced by an LED compared to its initial output at a given point in time.

In this case, the higher the number, the better the quality.

B defines the acceptable failure rate of the L rating.

In this case, the lower the number, the better the quality.

There are two other, less commonly used, ratings that relate to the performance of LED’s

C-Value defines the expected percentage of catastrophic fails when an LED module emits no light. This is extremely uncommon in LM-80 certified LED chips.

F-Value depicts the combined failure fraction. This is is a sum of the B and C values (F=B+C).

The physical size of a retrofit LED lamp limits its capacity for heat management. As a result, most retrofit lamps have a typical hour rating of approx. 10,000 to 15,000 hours. If used within an enclosed light fitting where heat cannot dissipate easily, this would reduce even further.