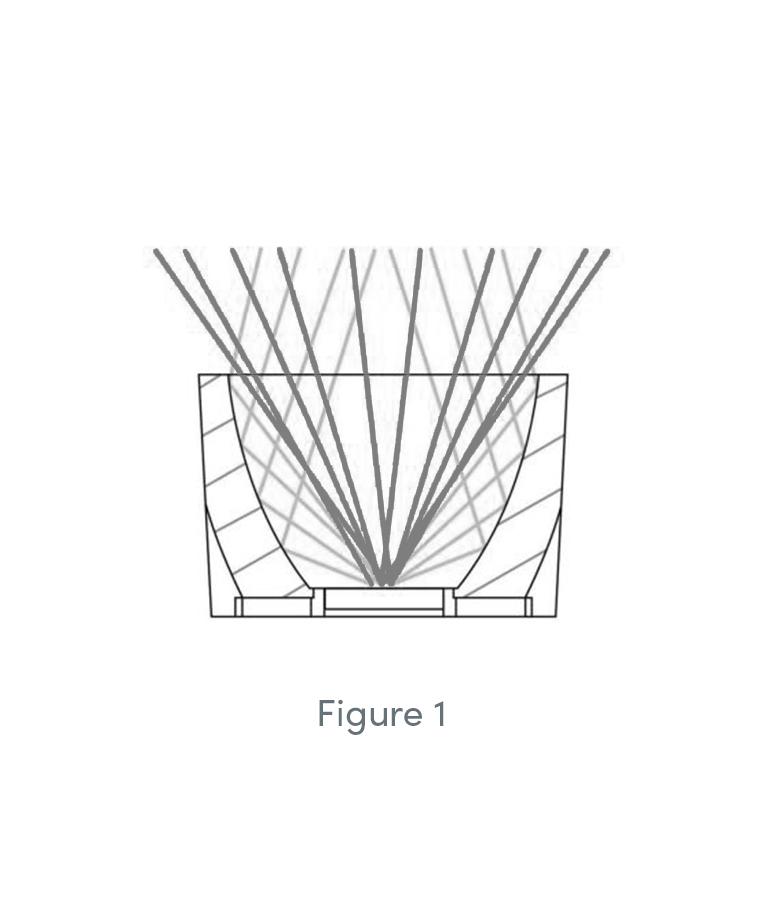 To address this, we need to control the light produced by an LED which requires the use of a secondary component, namely a reflector or lens.

What is a reflector?

A reflector is an OPEN cone-shaped component that is fitted around an LED chip to alter the direction of its light rays and achieve a desired beam angle.

It often produced from plastic, metal or glass and features a solid internal coating. The internal surface may be smooth or multifaceted depending on the desired lighting effect.

Reflectors do not absorb light. Any light rays that touch its surface are reflected, resulting in the greatest possible light efficacy.

However, the design of a reflector does allow the central rays of light produced by an LED chip to pass through unaltered. (Figure 1)

As a result, even a narrow reflector will allow some light rays to stray wider than then intended over long distances.

What is a lens?

A lens is a SOLID plastic form that works on the principle of refraction.

The solid nature of this component covers the entire LED chip, capturing and controlling all emitted light rays.

Firstly, a concave moulding at the centre of the lens, directly above the LED chip, folds the central light rays outwards, allowing them to be captured in the second stage.

Secondly, the outer moulding of the lens collects the widest rays of light, along with the rays folded outward in the first stage, and reflects them inward to achieve the desired beam angle. (Figure 2)

Lenses are very effective at controlling light, however, light efficacy is reduced as the light rays pass through the solid form.

Both lenses and reflectors have their place in the lighting world. Which component is best suited will depend on the goals of the lighting design.

If the goal is to achieve a tight beam with little to no light spill, a lens is likely to be the best choice.

If the goal is efficacy, ie. highest lux level for the lowest wattage possible (which is increasingly important under the latest J6 regulations) then a reflector will achieve the best result.

For more lighting tips, you can view the rest of our blog posts, or sign up for our newsletter to receive the latest in lighting information direct to you every month!